Full Version: Guitar Hero II: Spinal Tap Reference
You're currently viewing a stripped down version of our content. View the full version with proper formatting.
There are many references to the film This is Spinal Tap...

When you finish the encore song Tonight I'm Gonna Rock You Tonight by Spinal Tap in Guitar Hero II, the drummer will explode. This is a reference to the Spinal Tap movie where they said one of their drummers Spontaneously Combusted on stage.


...I picked the embed code so the video would start AT those times, but it just starts the video from the beginning. Am I doing something wrong?

The Stonehenge Venue is probably an obvious one; the band in the movie had trouble with a Stonehenge Prop being far too small, "in danger of being crushed by a midget!" 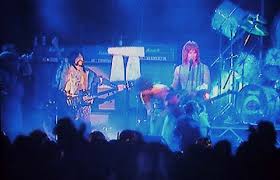 There is also a loading screen in Guitar Hero I that says, "Eleven IS louder than ten." Nigel Tufnel's guitar amp was customized to max out at eleven, instead of the standard setting of 10.

"It's like, how much more black could this be? and the answer is none. None more black. "
Reference URL's