MyBB Internal: One or more warnings occured. Please contact your administrator for assistance.
Did You Know Gaming? Forums - Namco loves you!

Full Version: Namco loves you!
You're currently viewing a stripped down version of our content. View the full version with proper formatting.
Hi!

I wondered why no one ever write about Namco here. Namco loves it's fans and filles it's games with cross-references, so everyone will find one from time to time. Here are some easier to find easter eggs - releated to the 1st Ridge Racer (PSX):

This Video will help me to explain them


No.1: listen to the first song "Ridge Racer", which starts at 0:55 (a few seconds will be enough). Then hear the music in this mini-game from Tales of Phantasia, where you have to race a guy in a town:


No.2: and once again music. Jump to 3:33, when the track "Rare Hero" starts to play - a song, that very often came back in the Ridge-Racer-Series in newer remixes. This track is already a remix of the music of the cutescenes of the original Pac-Man:

No.3: Go back to the footage of Ridge Racer at 4:53. you'll see how the gamer reaches the beach in the 2nd lap of the 2nd race. At this point it already turned night and some of the rooms in the hotel on the right have their lights on. I needed the smooth-filter of the PS2 to finally see it: this lights draw the face of the comic Pac-Man, you can see on the original arcade-mashines for example. These were a few and (partial) easy to find easter eggs only for the 1st Ridge Racer. It only scratches on the surface of Namco's hidden treasures for fans. One more example without "Riiiiiiidge Racer!"? No problem - Tales of Symphonia: Dawn of a New World:

I think, I don't have to explain it

Originally I wanted to show you something I found years ago in Ridge Racer 7: sometimes, when you left the 2nd tunnel of the "Mist Falls"-course, your can see a swarm of black, rotating squares, flying over the track instead of the bird-swarm. Long time I thought, it was a glitch, but than I saw footage of a progressed game of Xevious, which is in Ridge Racer 7 as a boot-mini-game (yeah, I know - I just don't like to play shooters, okay?). And then there were these black, rotating squares, flying over a jungle like in "Mist Falls". I tried to reproduce their apperance in Ridge Racer 7, but i failed and didn't find any footage of the squares in RR7 on YouTube (eventually they were patched away with the 3D-licence patch). But here are the squares I talked about in Xevious (at 2:48):

Wikipedia: Ridge Racer (series)
Reiko Nagase, face and grid-girl of many Ridge Racers, has a Sister named Kei Nagase, who appears only in the Ace-Combat-series. She has a notable resemblance to Reiko.

I always thought Reiko Nagase looked like a young Japanese boy (trap). Especially on Ridge Racer 3DS
Today I will take you to Nam Cobanda Isle:

this island is a hidden place in Tales of the Abyss and Tales of Vesperia and, like the wordplay in it's name guessed it, it's filled up with cross-references to other games from Namco Bandai Games. There are also sub-quests, titles, you can earn and so on.

For example notice the Pac-Man-ghosts and Dig-Dug-flowers decorating it's Abyss-version (the video contains some more references):


In the Vesperia-version there are dioramas of Klonoa, Metro-Cross and a game I don't know in front of the cam, which showing the main hall. Couldn't find (or make) a video, which shows, that you can play music from the 3 games, if you activate it, but you can see them at 6:50 (also here more references):


That's awesome! Nice find!
Today i tell you, that someone pinned Pac-Man with a powerpill on Talims costume in Soul Calibur II. Do you find him?

No. 1: after booting the PS3-version of Tekken 6, press the Home-button and go to the "PHOTO"-category. Now you can make screenshots of every moment of your actual game. The game will also print NBGI's copyrights on the pics.

No. 2: go to 1:32 at the intro-video below and you will see the tombstone of Leo's mother. You can read "Dauern sie in peace EMMA KLIESEN"

It should be german, but it's bullshit. "Peace", as you guessed it, is english - the geman word for peace is "Frieden".
Then Namco used the german politeness-form "Sie" (which has to start with a big "S" in this case btw), you would use for unknown people/people, you're not be friends with (your teacher, your boss, ect.). I don't think, that Leo, who tries to get revenge for the death of his mum, would write something that distant on her grave.
But the stupidest fault of all is "Dauern". Instead of the german word for "to rest", which would be "ruhe" in this case, they took the word for "to go on"/"to last".
To sum it up: instead of "Rest in peace Emma Kliesen" Namco wrote "Last in 'peace'(senseless word) Mrs. Emma Kliesen (respectfully, your son Leo)".

This car is a modified Danver Bass Cruiser, you can drive in Ridge Racer 6 & 7 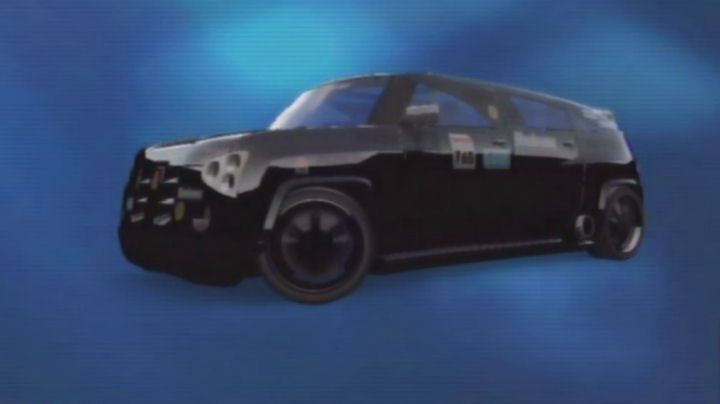 Someone hid a Pac-Man-reference here - do you find it?